KAIST’s College of Engineering, ranked 20th (21st in mechanical, 23th in electrical and electronic engineering , 32nd in computer science, 47th in civil and structural engineering, 23rd in chemical engineering, and 20th in materials sciences as of 2022) in the QS World University Rankings for engineering and technology, has joined the ranks of top universities. 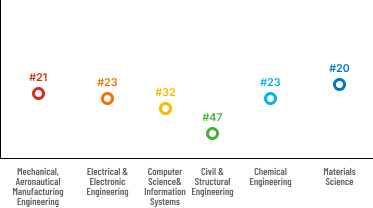